"And these are the houses that are stacked on top of each other to take up less space, dark colored walls that rise in all directions. Of these houses, some suddenly rise, others lower the same; some look at each other head-on and others askance; some are seen from the front and others in profile; there are some who only neighbor by an angle or turn their backs and are all the more strange since they are more neighboring. On these walls, so dark in appearance, rise roofs of the same color. There are streets, no doubt, in the middle of this village. One would be tempted to believe the opposite by seeing this jumble of houses thrown pell-mell on top of each other. "

Father Darde, pastor of Les Hermaux at the beginning of the 20th century 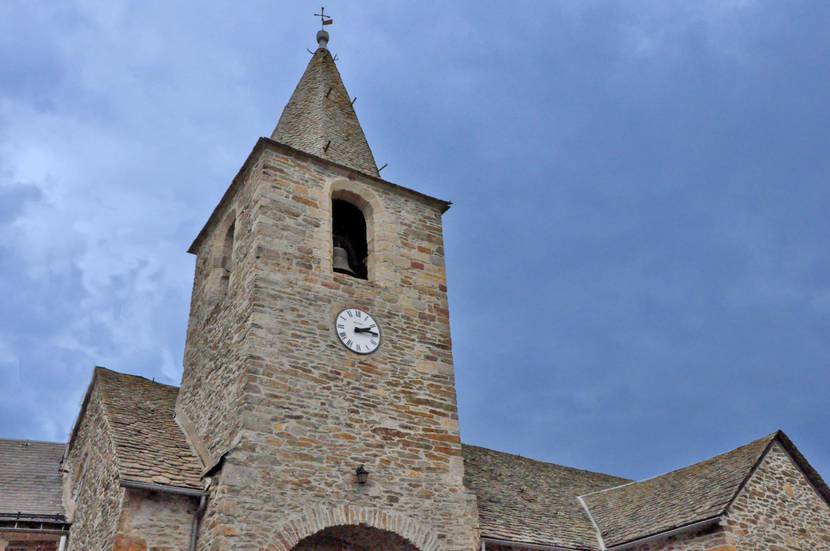 The Village of Les Hermaux

Built on the foothills of the Aubrac mountains, Les Hermaux dominate the Saint-Germain du Teil valley. The town extends from the Bonnecombe to the Aurolle Pass. Its preserved heritage testifies to its picturesque history, at a time when the life of men was very rough in Lozère and on the Aubrac plateau. Since 1976, about forty slabs posed by children of the country testify to the name formerly given to passages, paths and localities. Its inhabitants are called the Hermalziens and the Hermalziennes.

A bit of History

The origin of the village is unfortunately fuzzy because lost in the mists of time. We know that a castle existed near the church. At the time, the Lord of Les Hermaux was the Baron of Canilhac, who paid tribute to the Lords of Peyre. They reported to the Bishop of Mende, who owned a large part of Gévaudan's land under the King's decree. The castle was a defensive structure, protecting the Hermalziens and the lands of the lord located at the highest reaches of his barony. Of the ramparts that once surrounded the village, only one gate remains. People arriving from the east had no other choice but to cross it to enter the city walls. Realize that until 1875, the commune did not have a single passable road of communication with the other municipalities! The road going from Saint-Germain du Teil to the village, passing through the hamlets of Mascoussel and Fabriguette, was built that year.

The Cadet House and the village plaques

Visit the "Cadet house" and observe its beautiful porch, typical of Les Hermaux’s architecture. It is called this way in reference to the mayor of the village, "cadet" in Occitan. He still lived here a few decades ago. You can see the name of the house on slate plates. Local children, the Bouchier couple, made them in 1976. 45 similar plaques are scattered around the town. Written in Occitan and French, they perpetuate the old names given to the streets, squares and houses of the village. They contribute to its memory as well as that of the inhabitants. In the past, the village was self-sufficient because it had many trades. In 1845 there were 686 inhabitants for 144 houses. There were then a shoemaker, a blacksmith, a tailor, a stonemason, a miller, a weaver ... Some of these slates indicate the houses where these people lived (the shoemaker’s place, the blacksmith’s house...).

It is not good to live in Gévaudan in 1720. After a great famine which had deeply weakened the people, the pest plague fell upon them. It is likely that it was brought back by the wool trade coming from Smyrna, in Minor Asia, currently Turkey. It was an unfortunate merchant who brought it back to the hamlet of Corréjac, near Auxillac, on his way back from a fair in Saint-Laurent d'Olt where he was allegedly in contact with contaminated tissue. Fearful of seeing this plague arriving at Les Hermaux, the parish priest of the time organized a mission preached by Father Valette. On the closing day, September 14, 1722, a cross dedicated to Saint-Roch was erected in the middle of the village. Here is an extract from the act of vow deposited by the parish priest in the archives:

"Considering and seeing with regret and pain that the plague or contagious disease is increasing more and more around and near the said parish of Les Hermaux, that the source and the cause of this plague with which we are threatened can only proceed from sins which we have the misfortune to commit so often, recognizing that it is an effect of the wrath of God and that to appease and calm, we are resolved to prepare ourselves for death and put ourselves under the protection of the glorious and blessed St. Roch by making to his honor a sincere confession of all our sins and a holy communion to obtain from God by his help all that will be necessary for us for time and for eternity”.

Some will say that this initiative was effective because the evil that decimated more than half of the population of the villages of Banassac and La Canourgue did not reach Les Hermaux, just as it spared the villages under Nogaret’s mandate (Trélans, Saint-Germain du Teil and Saint-Pierre de Nogaret) and Les Salces.