Agro-pastoralism that Men have practiced here for millennia bequeathed us on the Grands Causses highlands very pretty traces scattered between the stony plains and pine forests: cazelles(stone build shepherds’ shelters), jasses, lavognes (man-stoned geological depressions converted into rainwater collectors for cattle)... but also sublime farms with typical Caussenard architecture, some still inhabited. This so-called small heritage is an integral part of the landscape, the territory has been classified as "Cultural Landscape of Mediterranean Agropastoralism" by UNESCO.

The old Causses highlands farms are mostly built on the same scheme: their walls are always bare, made of dry stones linked with a crushed limestone mortar, and covered with slate. The virtual absence of wood is explained by the scarcity of the resource but also to prevent the risk of fire.

On the ground floor is the sheepfold, which vaults protect the sheep from the heat in summer and the cold in winter. An external staircase leads to a terrace which gives access to the dwelling, located on the middle floor.

The living space consists of a large room combining the functions of kitchen, dining room and bedroom. A wooden staircase or ladder gives access to the attic. Each house has its cistern to collect water, scarce resource on the Causses highlands.

Today too small to accommodate the growing herds of breeders, these beautiful farms are diverted from their primary function to become simple places of habitation or holiday country cottages. 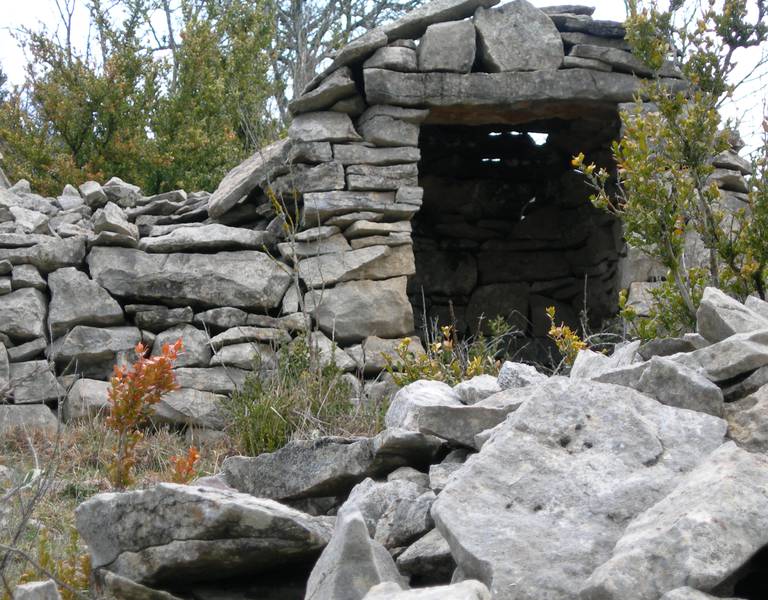 While walking on the Causse highland you will surely have the opportunity to spot these kind of small dry stone huts, most often of rounded and arched shape. These "Cazelles" were built by the shepherds to protect themselves from the sun, rain and wind, on the often windy Causses highlands. They built them according to an ancestral technique requiring great know-how. In the 18th century, road workers who took care of road maintenance were inspired by these models to build shelters along the roads on which they were sometimes forced to stay overnight.

"Jasses" are the kinds of sheepfolds found near farms or isolated on pastures. They also served as shelters for the shepherd and his cattle during the night, or when the climatic conditions, which can suddenly change on these high plateaus, required it. The jasses were also used to welcome sheep during gestation (late summer and fall).

Like the Caussenard houses, these buildings were constructed entirely of limestone, and participated in the collecting of rainwater. They are mostly vaulted with lancet arches. This typical heritage of the Grands Causses highlands, hardly used any longer, is nowadays threatened. Farmers whose herds have grown considerably, no longer use these isolated dwellings, which are sometimes saved from ruin by being converted into a lodge or a secondary residence.

"Threshing floors" are large flat areas found in front of farms in the Grands Causses highlands’ villages and hamlets, where wheat was threshed. Indeed, once the harvest is finished, the work is still far from finished for the peasant: he must carry the sheaves on the threshing floor to separate the grains from the ear. These areas are always installed in the sun so that the heat and the dryness make the ears burst more easily. The techniques differ according to times and regions: one struck the ears of wheat first with tools, while later oxen or horses will be used. 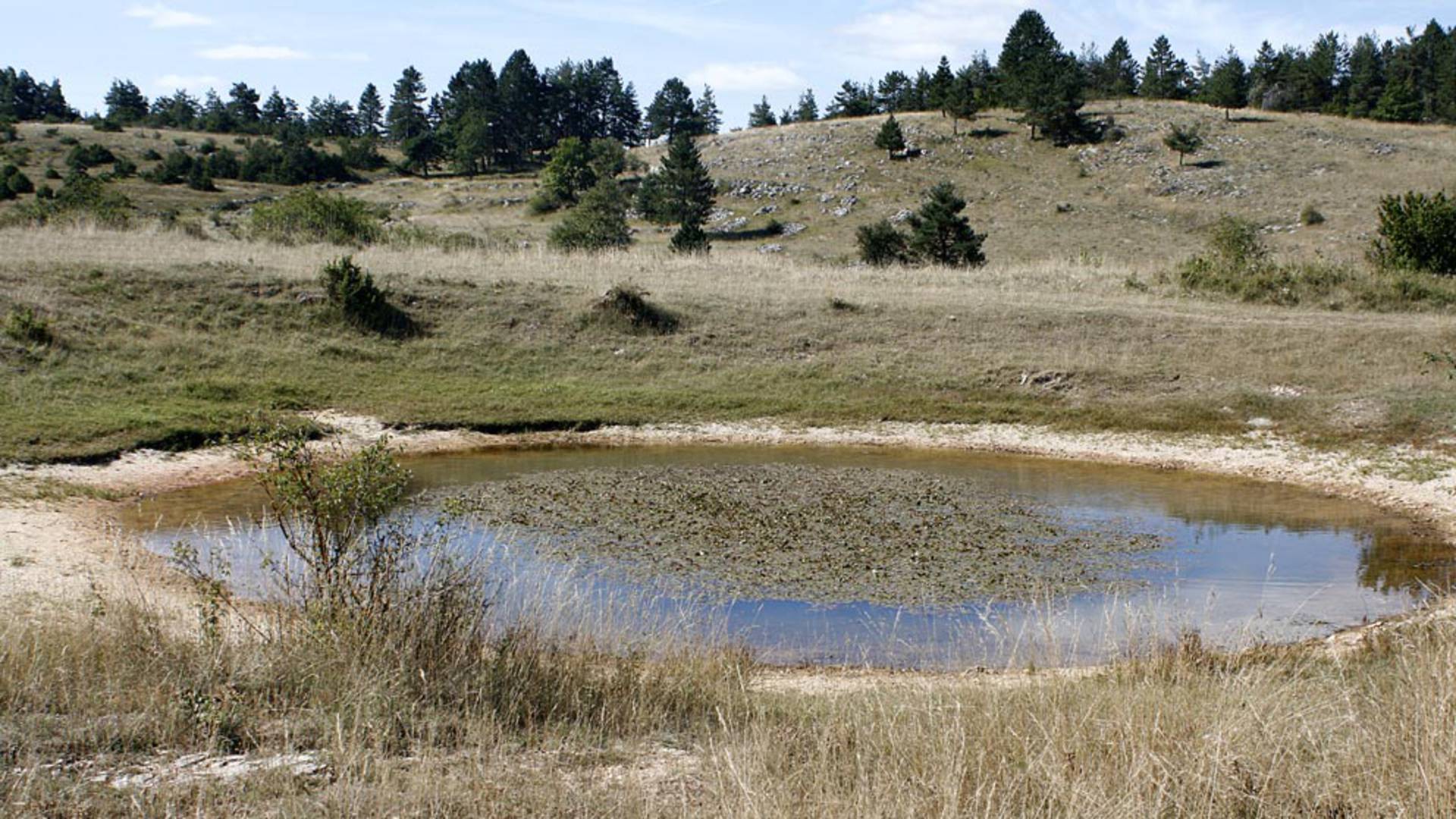 These are kinds of drinkers arranged in "sotchs", natural depressions in the form of a funnel that can be found on the Grands Causses highlands. They were covered with clay to contain the water, which would not remain on the permeable limestone soil. The Lavogne thus formed, allowing the herds to quench their thirst. It requires regular maintenance because in the dry season the clay tends to crack and lose its seal.

In Lozère’s countryside, where life was harsh and where the shadow of famine constantly hung over the population, bread was essential. Before the development of bakeries, the villages’ inhabitants regularly met around the oven where it was made. The ovens are most of the time built on the same plan: they consist of a hangar with a structured or vaulted roof covered with slate, as well as a heating chamber protected by masonry walls and always vaulted in order to conserve heat. Those of the Grands Causses highlands are mostly built of limestone and the roofing of limestone slate. 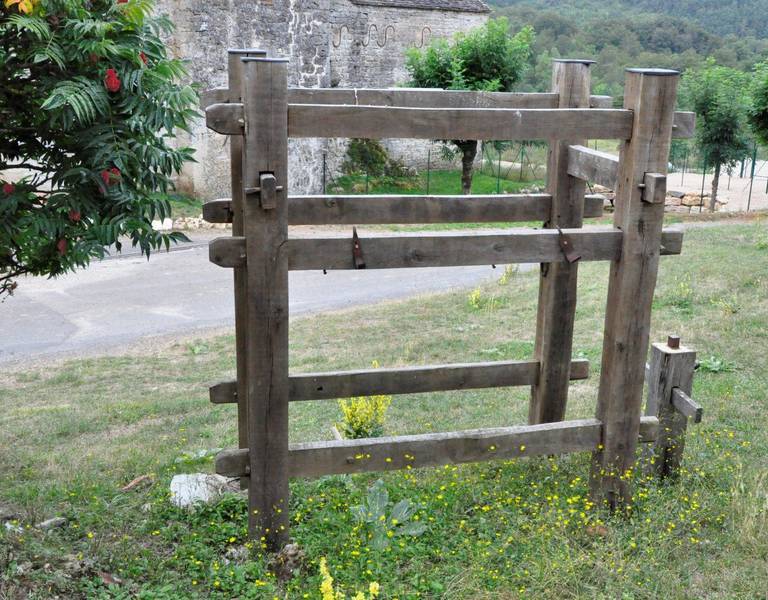 The farrier station or "ferradou" served to shoeing cattle used for skidding or agricultural works. The animal was placed in the station, its head held in front by a yoke and sometimes placed on a small metal plate. Straps were then attached to the horizontal beams under its belly in order to support it, then its legs one by one on the wooden beams parallel to the ground, a sort of "rest" to facilitate the shoeing of its hooves.