At the foot of the impressive rocky cirque, a fairy-tale castle ...

The castle of Saint-Saturnin, history and architecture

We know that a castle already existed in the 12th century in Saint-Saturnin, belonging at the beginning to a lord of Cénaret, count of Montferrand, of the family of Pope Urban V. At that time a list of fiefs located in the diocese of Mende states that the castle is a "royal fief", that is to say that it depends directly on the king of France. The square tower is probably the oldest architectural element of the current castle. It dates from the end of the 13th century or the beginning of the 14th century. The main building is located to the south because it is the best exposed and least vulnerable side. Other secondary buildings are leaning against the walls of the quadrilateral. The XVIth is the time of the wars of religion. Defensive architecture changes are underway: the northeast tower is rebuilt. Larger, it occupies both the function of housing and defense, and becomes more comfortable. Around 1630, a baron from Cenaret sold the castle to Louis de Loubeyrac, who married his daughter to Bernardin Ysarn de Freissinet, baron of Valady.

The couple decided to make Château Saint-Saturnin their main residence. Thus, major works are carried out so that the castle responds better to this function. The main building has been reworked and three monumental fireplaces have been built there, still visible inside the castle. We build the staircase serving the two parts of the main building. We also built a west wing, opened by large bays and a majestic door surmounted by the family coat of arms. The castle was the main residence of the Freissinet family until 1752, when the Marquis died prematurely and his widow decided to leave and entrust it to the farmer of the estate for about 40 years. In 1794 it belonged to Godeffroy de Freissinet-Valady, deputy for Aveyron sentenced to death at the Convention, for having voted against the death of the King. Among his assets will be cited "an old castle audit Saint-Saturnin". Two years later, his widow decides to settle in the castle and start repairs, the last before its deterioration. In the absence of a direct heir, the next occupant is Count Charles-Casimir de Freissinet-Valady de Laguépie.

He did not maintain the castle, gave part of the ground floor to a farmer in the 1840s and bequeathed him when he died to the bishopric of Mende. The bishopric will make it a summer residence for members of the clergy before selling it for a bite of bread to finance the completion of the porch of Mende Cathedral. The buyer is Mr. Camille Samson, who makes it a materials warehouse for his recovery business. At that time the castle was already very dilapidated but still retains the covers of its buildings. The west entrance wing still has its framework, its ruin probably being due to the dismantling of the portal, sold at the Château de la Caze in Laval-du-Tarn in 1910. The descendants of Camille Samson then sold it to the Council General, who will sell it in 1995 to private owners who will begin its reconstruction. Today the towers no longer threaten to collapse, the roofs as well as parts of the house have been restored. The building site is still in progress at the present time, even if the castle has already regained some of its former grandeur. 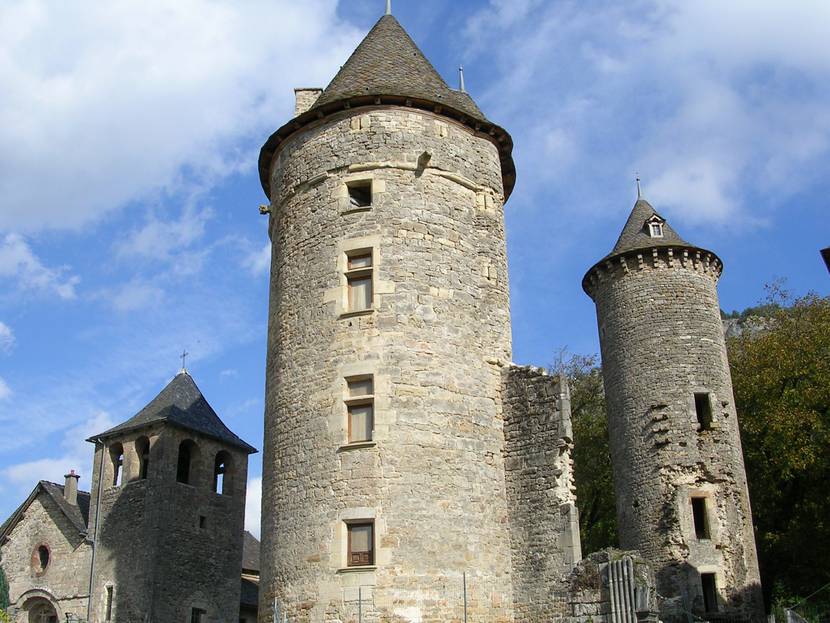 - The last count of the castle -

Charles asimir de Fraissinet was a cultivated man who had studied in many cities in France and Europe. He returned as a result of these trips to live as a recluse in his castle of Saint-Saturnin. According to the inhabitants of the village, he spent his time covering the castle walls with indecipherable writings and a frieze whose patterns were repeated endlessly. He slept in a bed of ropes covered with a shroud and on stormy evenings he would settle in the library, carve out his skin and plunge his pen directly into his blood, annotating a number of now cursed works. The inhabitants said that they saw him climb the mountain several times with a huge bag of stones, which he got rid of when he got to the top and started again until dawn, like an unfortunate Sisyphus from Lozère. Some other evenings he went to the chapel adjoining the castle or to the cemetery, where they uttered appalling cries that froze the blood of all the villagers. This old man with a big white beard was said to have gone mad at living alone in this cursed castle. He ended his life in 1863 at the age of 78 years old. Some say that he died at the Mende hospital where he was being treated for his mental drifts, others say that he spent his days in a hut which he had built in the forest. We do not know if all the stories that run about his life are true but the legend is still present in all the minds of the inhabitants of the village. On his tomb, still visible in the cemetery adjoining the chapel, one can read written in Latin: "Ci-git casimir, count of freissinet, of illustrious birth, more noble by his faith, his religion and his austere virtue. "