Overhanging the void stands a limestone rock 30 meters high, which has been sculpted over time by erosion: the Malepeyre clog It is a real geological curiosity. This rock, classified as a natural site, takes the strange form of a hoof, from which it takes its name. It is a nesting site for rock birds (peregrine falcons, eagle owl, red-billed crave ...)

When you are under the arch of this rock, you will have a breathtaking view of the Urugne Valley and the Monts de l'Aubrac. To get there, from the Canourgue take the direction of the Gorges du Tarn by the D998, after 2 kilometers take the D46 on the right, direction la Malène. In the climb, to the left of the road, he will wait for you ... 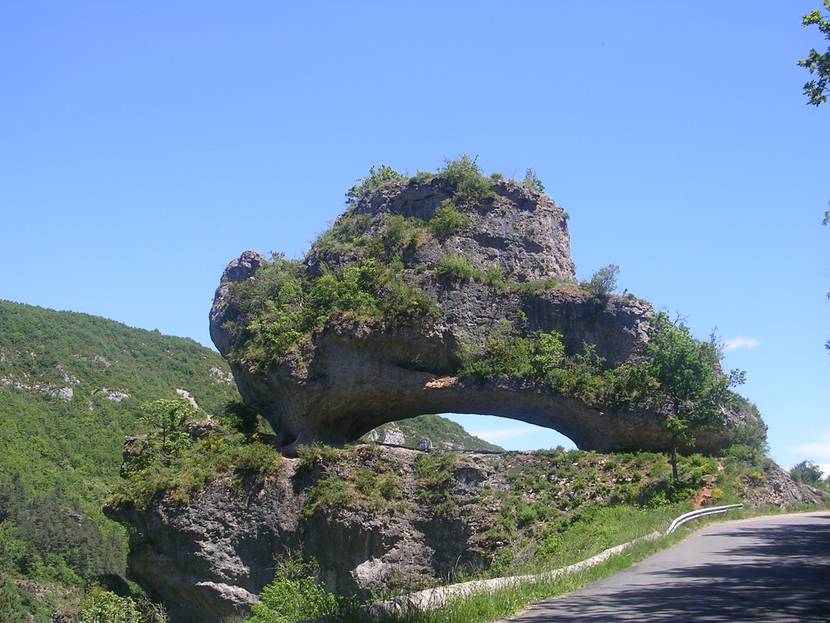 Legends of the Malepeyre glog

Three legends run on the origin of the astonishing rock ...

The Drac, a fabulous animal, spitting flames, haunted the Malpas and terrorized passers-by from the top of its Malepeyre. Bishop Frézal floored him, sprinkling it with holy water. The petrified dragon stopped sowing terror! You who pass at the foot of the Sabot, look good! Some see a shoe but this strange stone is none other than the drac frozen forever!

Gargantua, passing through La Canourgue, forgot his shoe, or rather his clog!

Margot was a young shepherdess on the Causse. On summer evenings, when the lavognes lacked water, the cute one went down to the Urugne valley to make her herd drink. While the animals were drinking, she paddled naked in the clear waters of the river. Suprise by a young canourguais, she took fright and fled. In a panic, she lost one of her hooves which solidified on the spot. Over the years covered with layers of limestone, the hoof became a monumental sculpture.